finally it is time to share the latest news about Sownloader with all of you. Since my last blog post I got an answer from Smule according to the issues with Internet Explorer (IE).

Here is what they said:

Thanks for contacting us! We suggest trying other web browsers, such as Firefox or Google Chrome. […] We’ll bring it all up with the appropriate team. We can’t promise anything will come of it, however it will certainly be considered.

So it is not impossible that this issue will get fixed in the future but it is definitely not on high priority. They suggested to use another browser instead of IE. That is exactly what I do in Sownloader 8! Honestly, who wants to use the IE? From now on Sownloader uses the great GeckoFX engine from Firefox!

In addition to the GeckoFX engine, Sownloader comes in an all new stunning dark theme. Here is what it looks like: 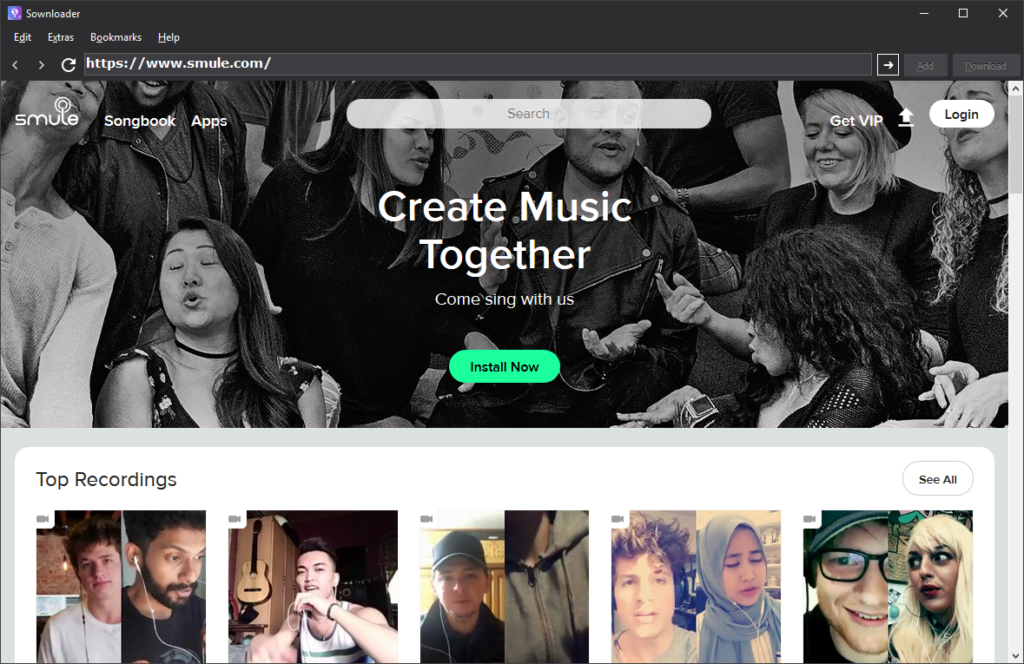 The dark theme looks just stunning. It is perfect to browse through your media at either day or night time. Moreover Sownloader is now completely resizeable!

Get rid of old stuff

I decided to remove some stuff of Sownloader for a good reason.

Which features were removed?

Instead of the old Supdater, Sownloader will now use an all new update mechanism which is much easier to handle. In addtion to this I am able to add more security for update files in the future much easier.

Sownloader has been completely rewritten in C#. This means that there might be some bugs at some places. I will fix them as fast as possible if you inform me about the bug via email.

You can download the latest version of Sownloader for free right here.

[General]
+ Added GeckoFX 45 Core to Sownloader -> Sownloader is not longer based on Internet Explorer, now it uses Firefox.
+ Sownloader has been completely rewritten in C# instead of VB.NET
+ Sownloader URL search engine 3.0
+ Added ALT related shortcuts to buttons and menus
+ Added FFMpeg 3.4
+ Added Mozilla Public License
+ Added new MarvinKleinMusic favourites
+ Added new update mechanism
+ Added history suggestions back to the address bar
+ Added “Send feedback…” to Help Menu
+ Added “About Sownloader 8” to help menu
~ Renamed “?” to “Help”
~ Adjustments to the config class
# Fixed an issue with finding video urls
# Fixed an issue with video files which are too big
# Fixed an issue with converting when the file path contains a white space
# Fixed an issue which caused Sownloader to detect the wrong performance URL
# Fixed that Sownloader was not able to download on computers, where the webclient is blocked by default
# Fixed “ding” sound by pressing enter in the address bar
# Fixed wrong animation for reloading a webpage
# Fixed blank Smule website
# Fixed an issue with invalid album cover art URLs
– Removed setting to delete temporary files -> Sownloader will do this automatically now.
– Removed setting to set the current year as default ID3Tag -> Sownloader will do this automatically now.
– Removed the button to open appdata in settings -> config.ini is now saved in the applications default path
– Removed switch for ID3Tag settings -> the ID3Tag popup will now be default -> can be turned off in the settings
– Removed options for network access -> Sownloader uses the default connection of your system
– Removed Supdater

One thought on “Introducing Sownloader 8”